Etosha National Park is an amazing expanse of a barren sand pan on one side and bush on the other. There are plenty of waterholes to explore where you may see an elephant, giraffe, southern oryx  kudu, springbok, hyena, ostrich, zebra, jackals and wildebeest all drinking together. There are also plenty of birds to see as well.

There are around 40 watering holes and springs dotted along the roads linking the west (Okaukuejo) and the east (Namutoni) of the park alone. 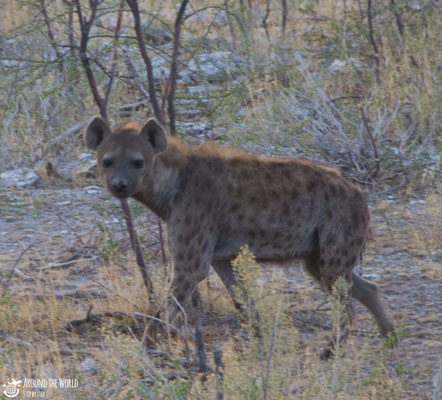 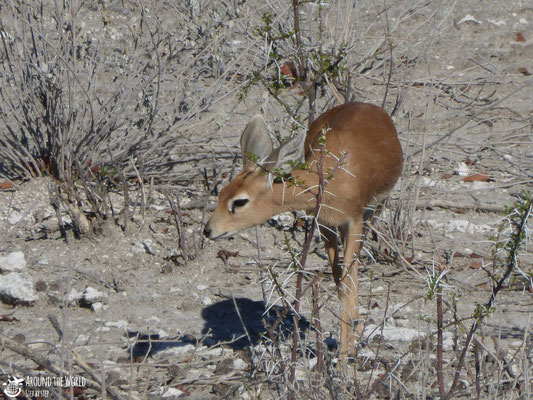 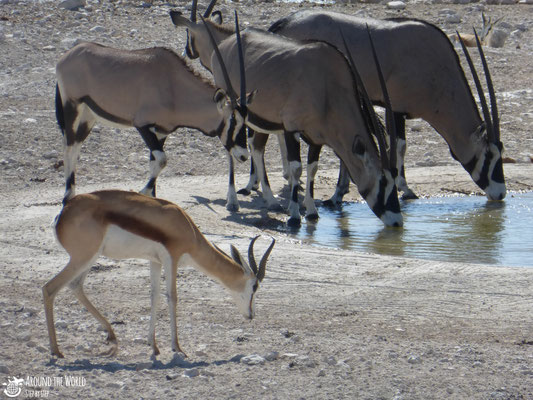 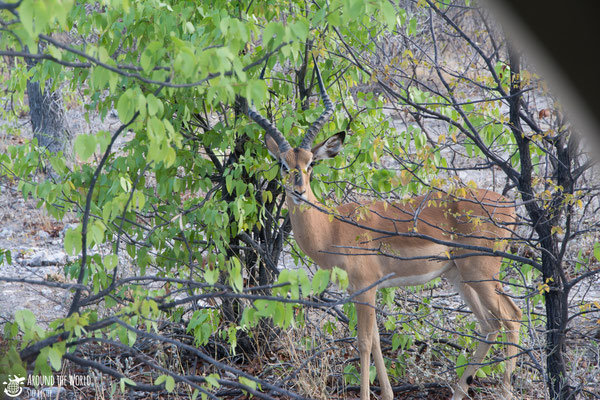 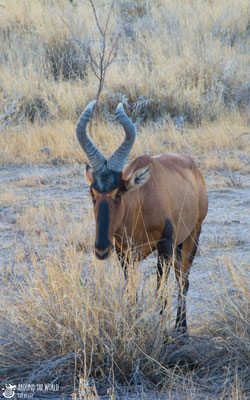 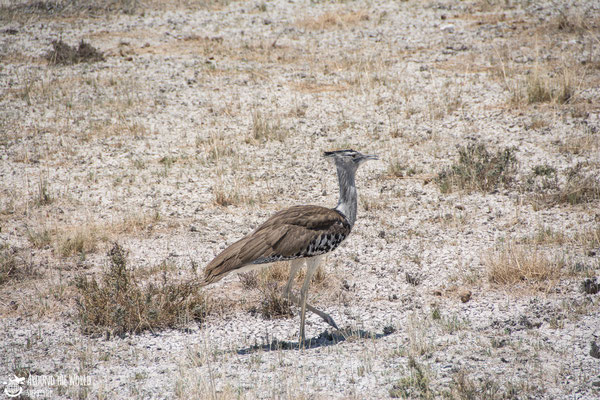 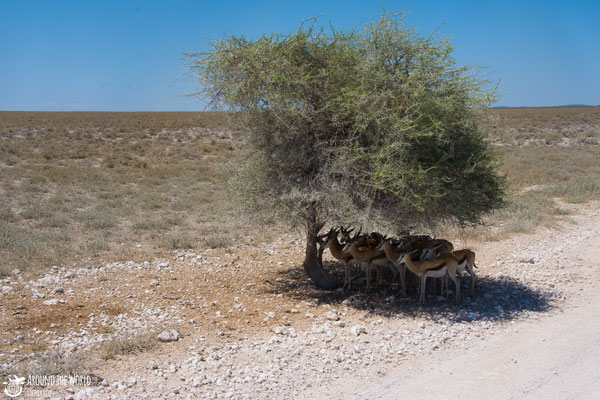 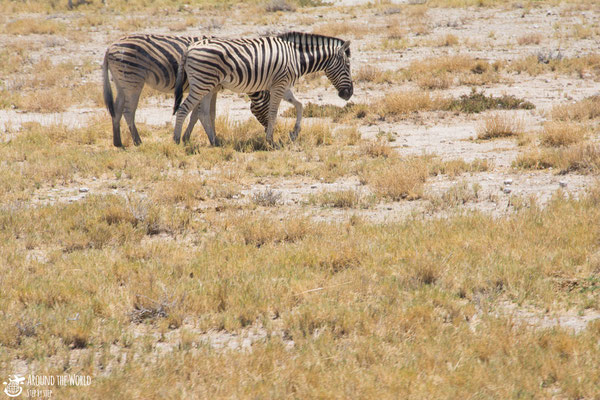 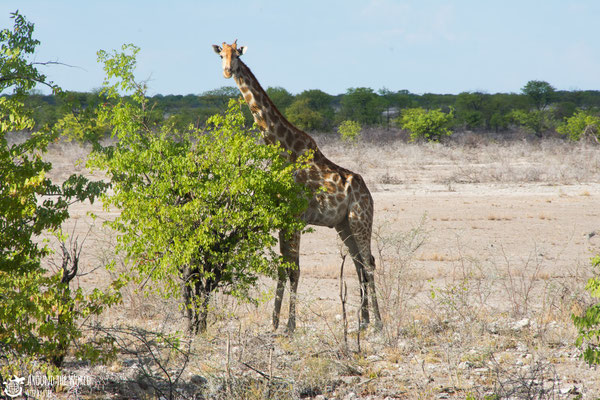 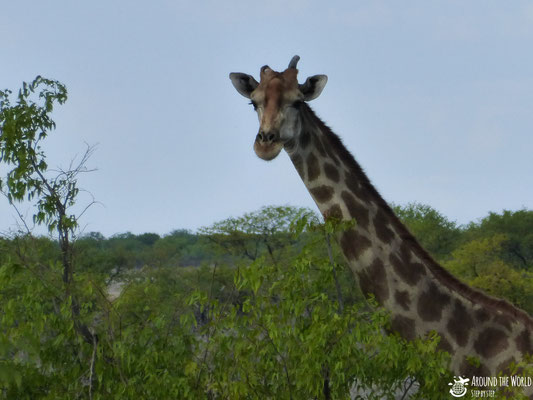 Our tour guide already told us, we will get excited with all of the antelopes at the beginning, and at the end we will be tired of them. So true, in our first minutes on the park we ask our driver every time that we so antelope, at the end we didn’t have any interest.

The game driving was absolutely amazing and we saw so many animals. The waterholes were a definite highlight, I could have sat there and watched the animals for hours. I was shocked at how close the animals were to us and were commonly at the side of the road as we were driving through.

Observing the animals in freedom is completely amazing, once you see wild lions, zebras crossing in front of your jeep, you will never be the same. A trip to the zoo will never compare.

The king and the queens

Around 750 lions live in Etosha. We sow our first day quite early and at the end of the two days we counted like 30. Most of the time they were just sitting under the shadow sleeping, or close to a waterhole. Some had a big belly probably would have hunted something the night before. 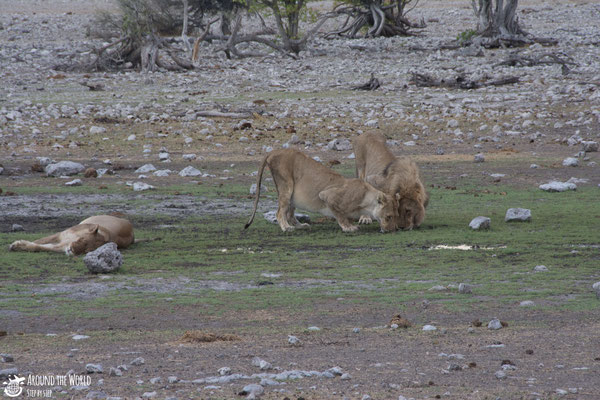 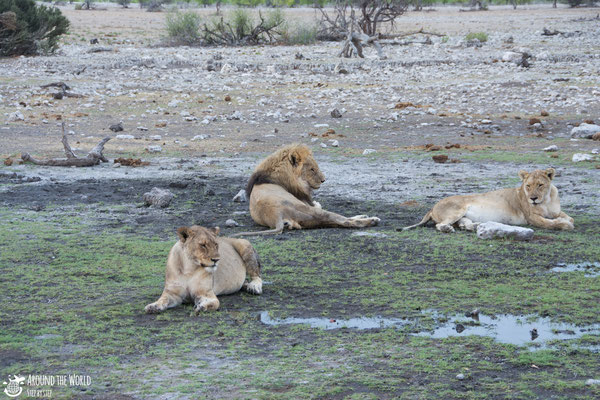 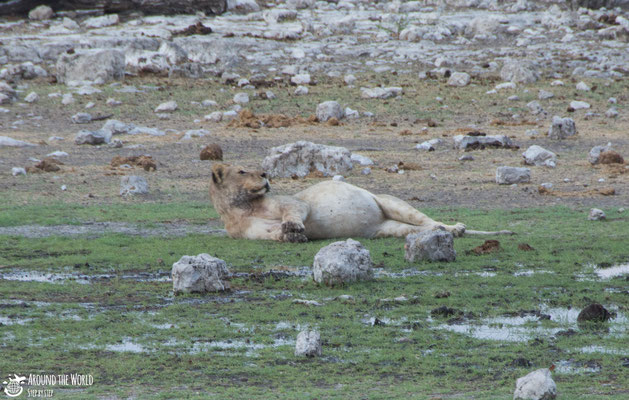 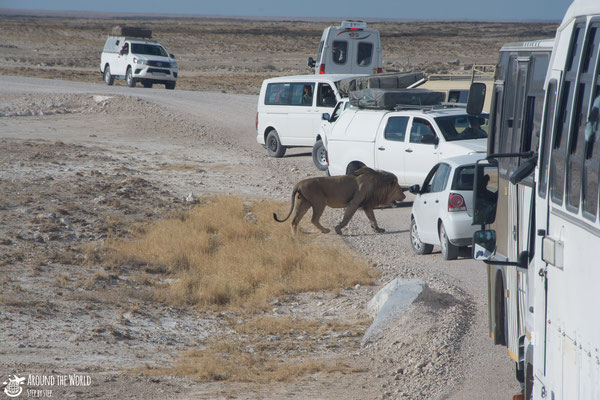 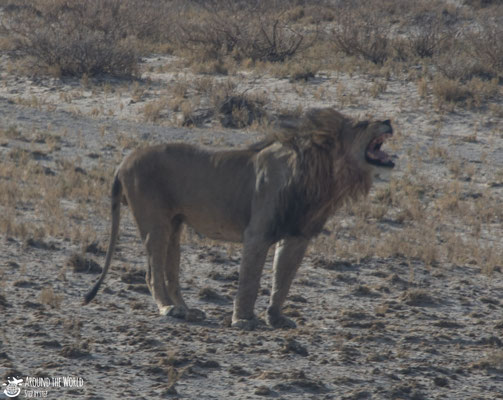 It was funny to see how the rest of the animals was waiting in the distance to drink. If the one of the lions make a small move all of the zebras start to walk in opposite direction

In Etosha on only the animals were interesting, also the landscape. In the language of the Ovambo tribe, Etosha means ‘great white place’,  and it refers to the White dessert that covers almost 5000 km2 of the park called the Pan of Ethosa. A salty white desert that only the ostrich pass through, the rest of the animals avoid it. 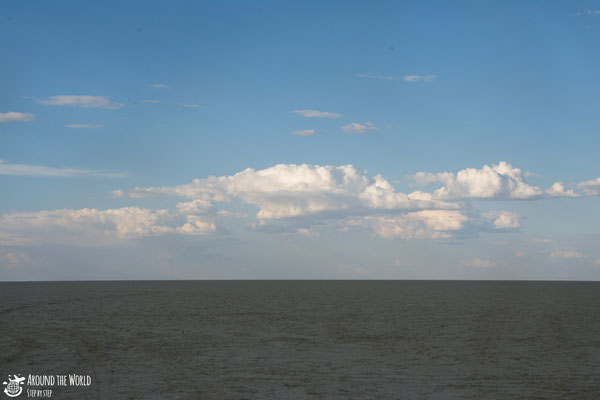 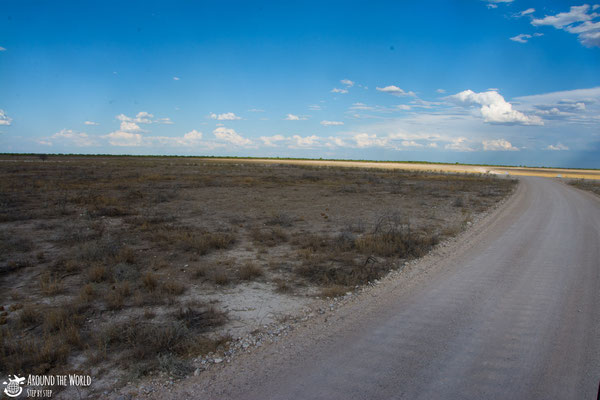 The waterholes are not only a good place to spot the animals but also to enjoy the colors of this country, the contrast between the blue sky and the dry sand is beautiful.

Although we get lucky and it didn’t ryan while we were there, in another parts of the park was raining, rain is not the best to have if you want to see animals (specially elephants).

We didn’t get any rain but what we had was a sand storm, this last two pics are taken the same day with hours of difference in our way from and to the camping, I didn’t make any editing in this two pic, just add the watermark. 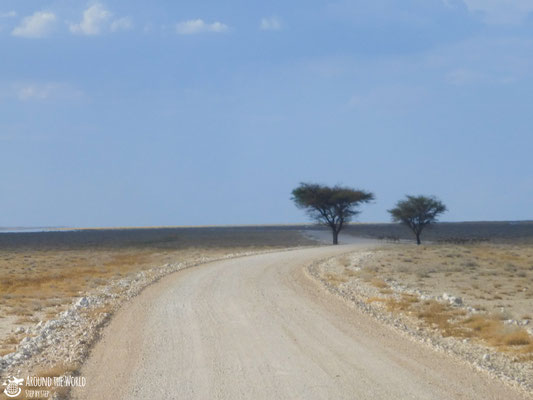 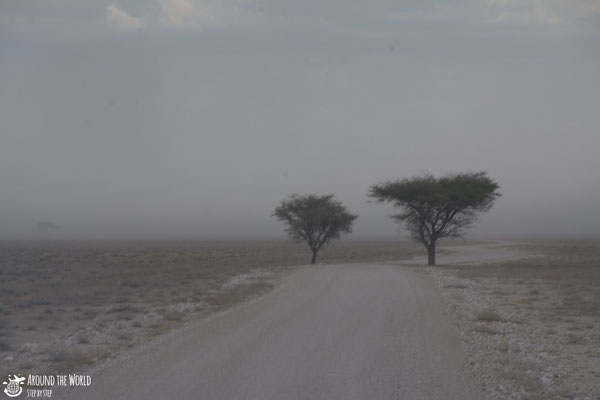 The waterholes of the campings in Ethosa are artificial, they were make so the turist can see animal drinking water during the night.

After our first day in Ethosha we arrive to Halili camping just in time to see the sunsent. I went to the waterhole and although it was really busy but I manage to get a good spot.

At the beginning there were a rhino drinking some water, (Etosha hosts a healthy population of black rhinos - one of Africa's most important black rhino populations inside of reserves. White rhinos have been reintroduced but are rarely seen in the park) after a while another came, but  the best was, that the nature gave us one of those sunset where the sky turn pink around, it was really amazing!!! 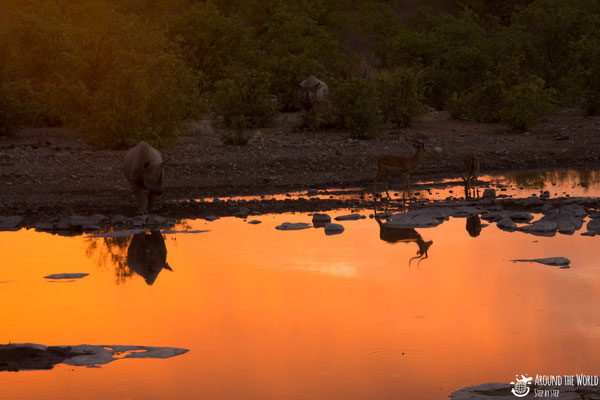 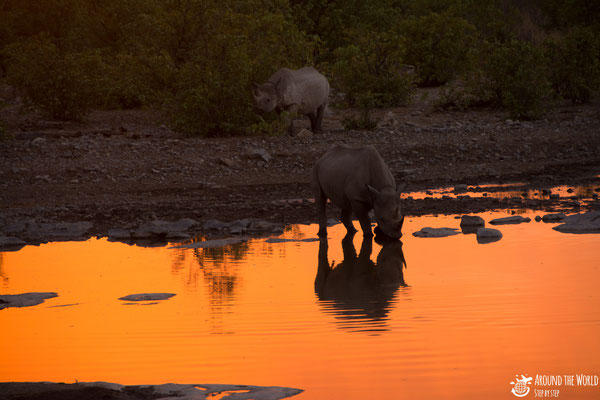 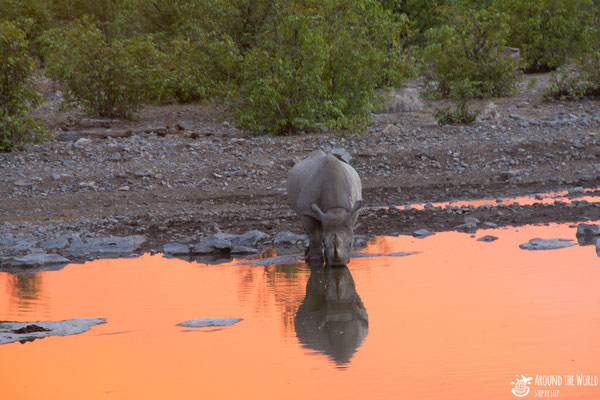 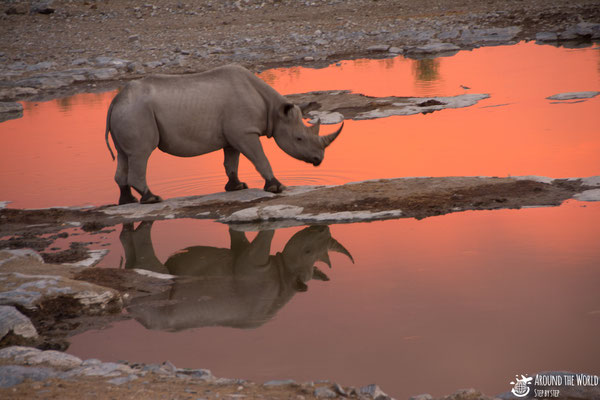