The Skeleton Coast is one of the worst areas to sail, that’s why is possible to see some ship that were stranded close to the coast.

The currents, wind and the dessert make almost impossible to survive in case of get stuck in the coast. The Skeleton name comes because the whalers use to through the bones close to coast . 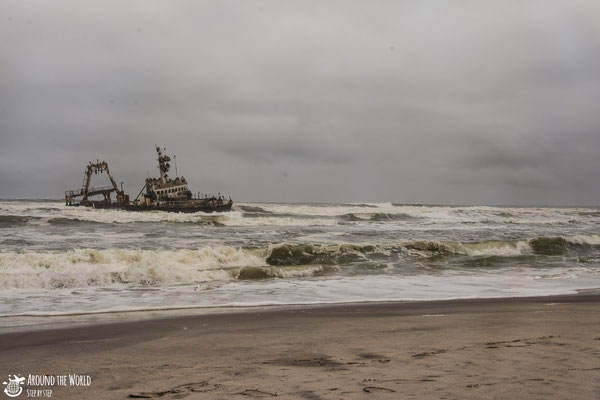 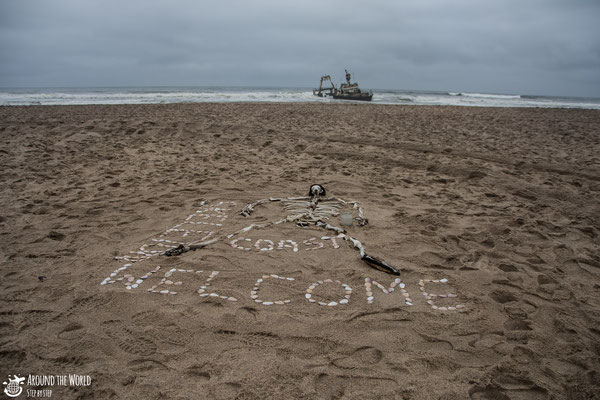 The Spitzkoppe is a group of bald granite peaks or inselbergs The peaks stand out dramatically from the flat surrounding plains. The highest peak is about 700 m (2,300 ft) above the floor of the desert below. . Next to the Spitzkoppe can be found the "Small Spitzkoppe" with a height of 1584 metres above sea level and next to it the Pontok Mountains.

Many examples of Bushmen artwork can be seen painted on the rock in the Spitzkoppe area.

Stunning colours of Spitzkoppe make this place perfect for photography. Orangey/ red mountains, rocks, paths vast open spaces taken against the clear blue are absolutely amazing. You  feel like you are on another planet.

Oliver Stone choose Spitzkoppe as filming location for 2001: A Space Odyssey in the "Dawn of Man" sequences. 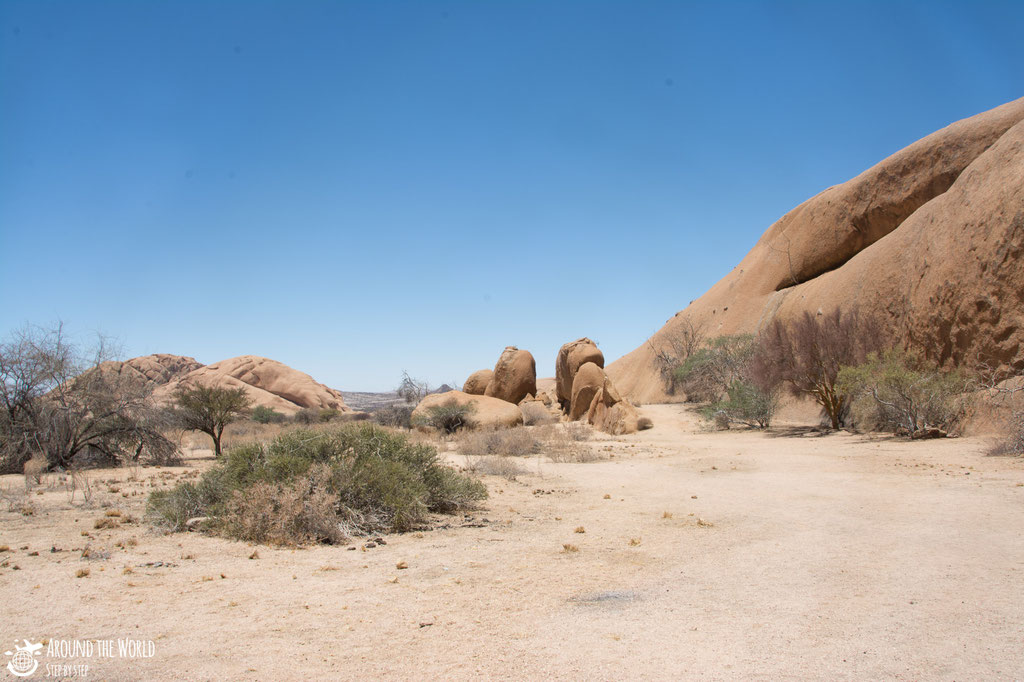 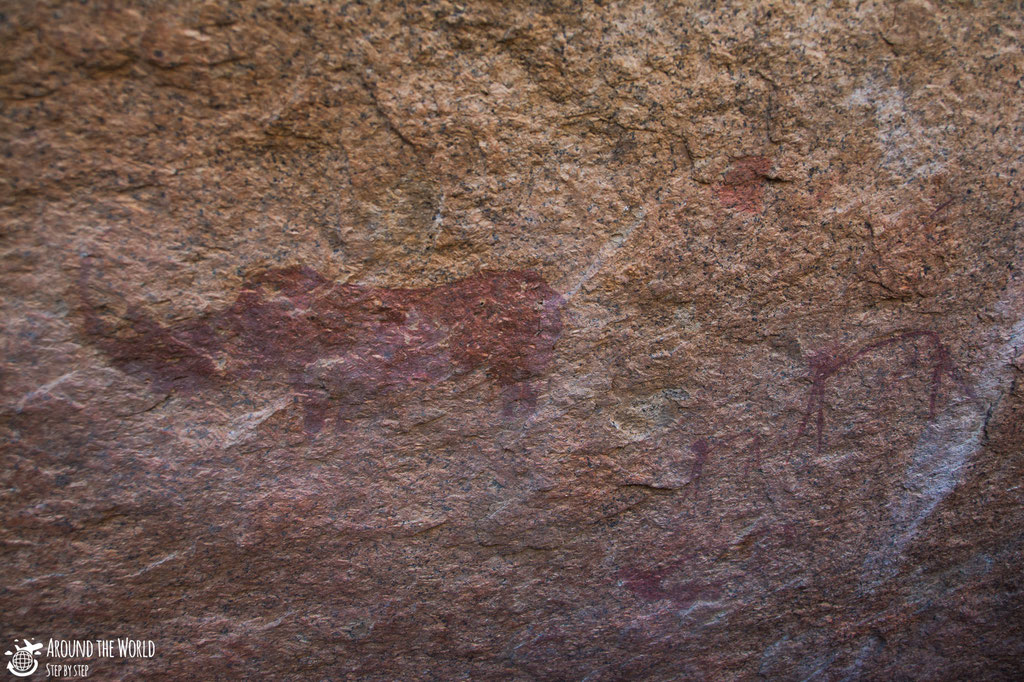 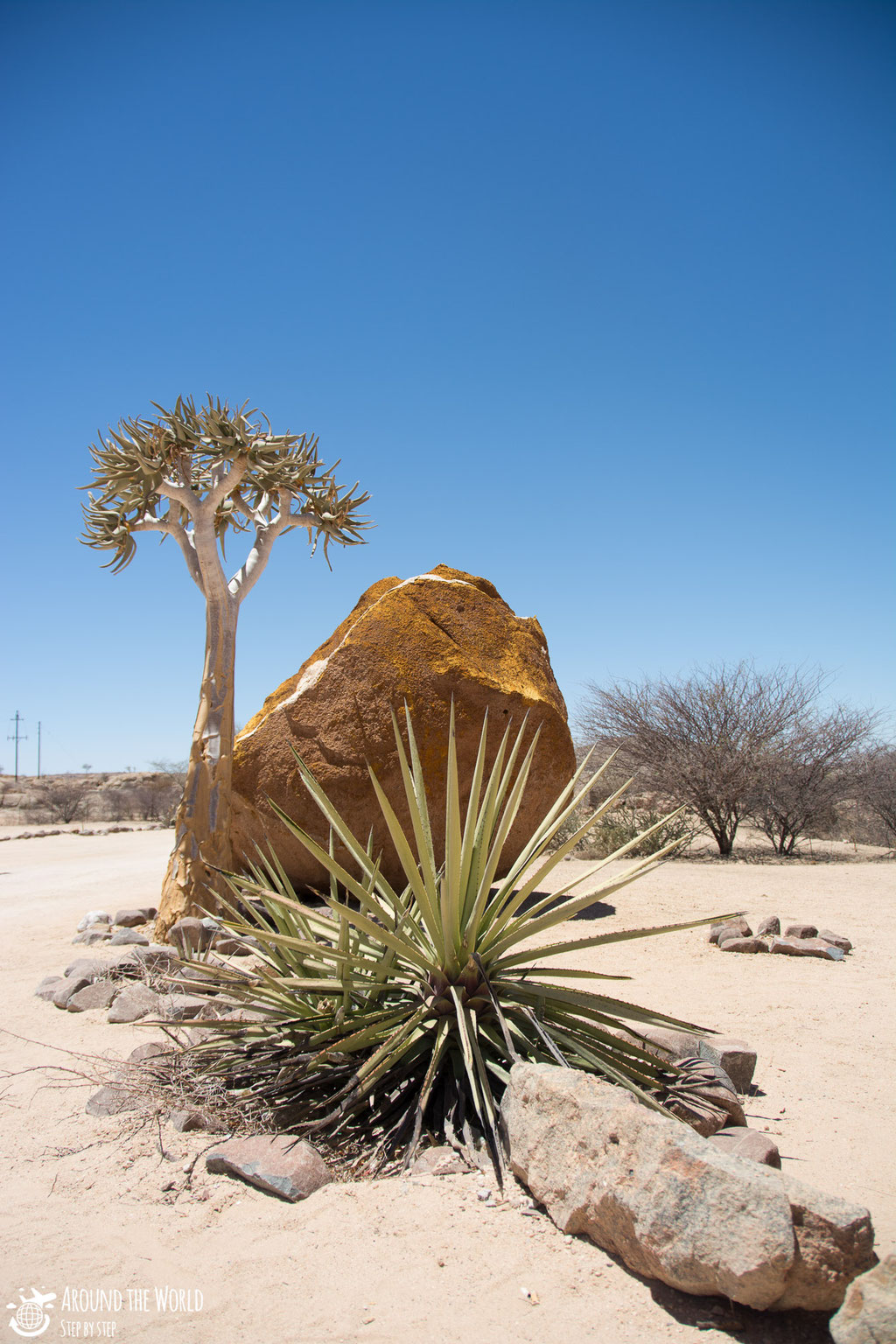 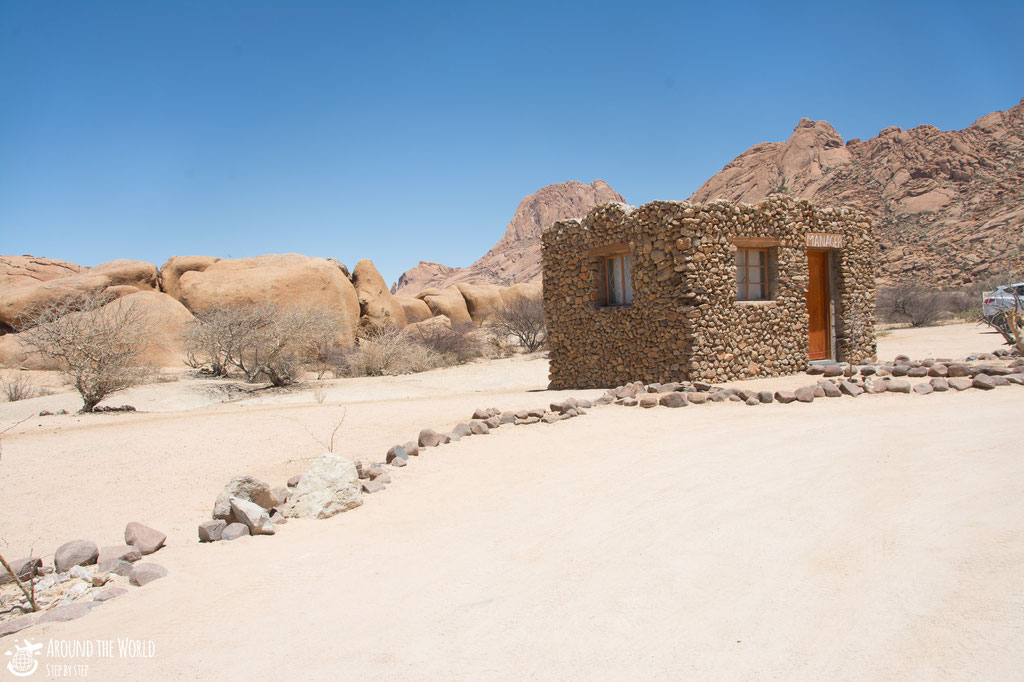 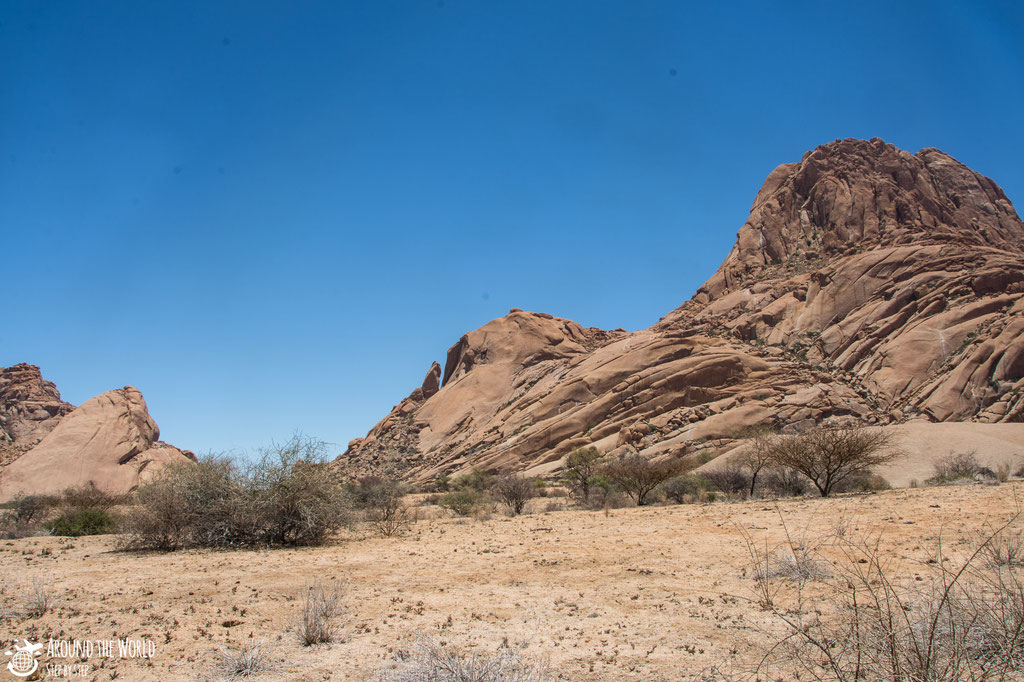 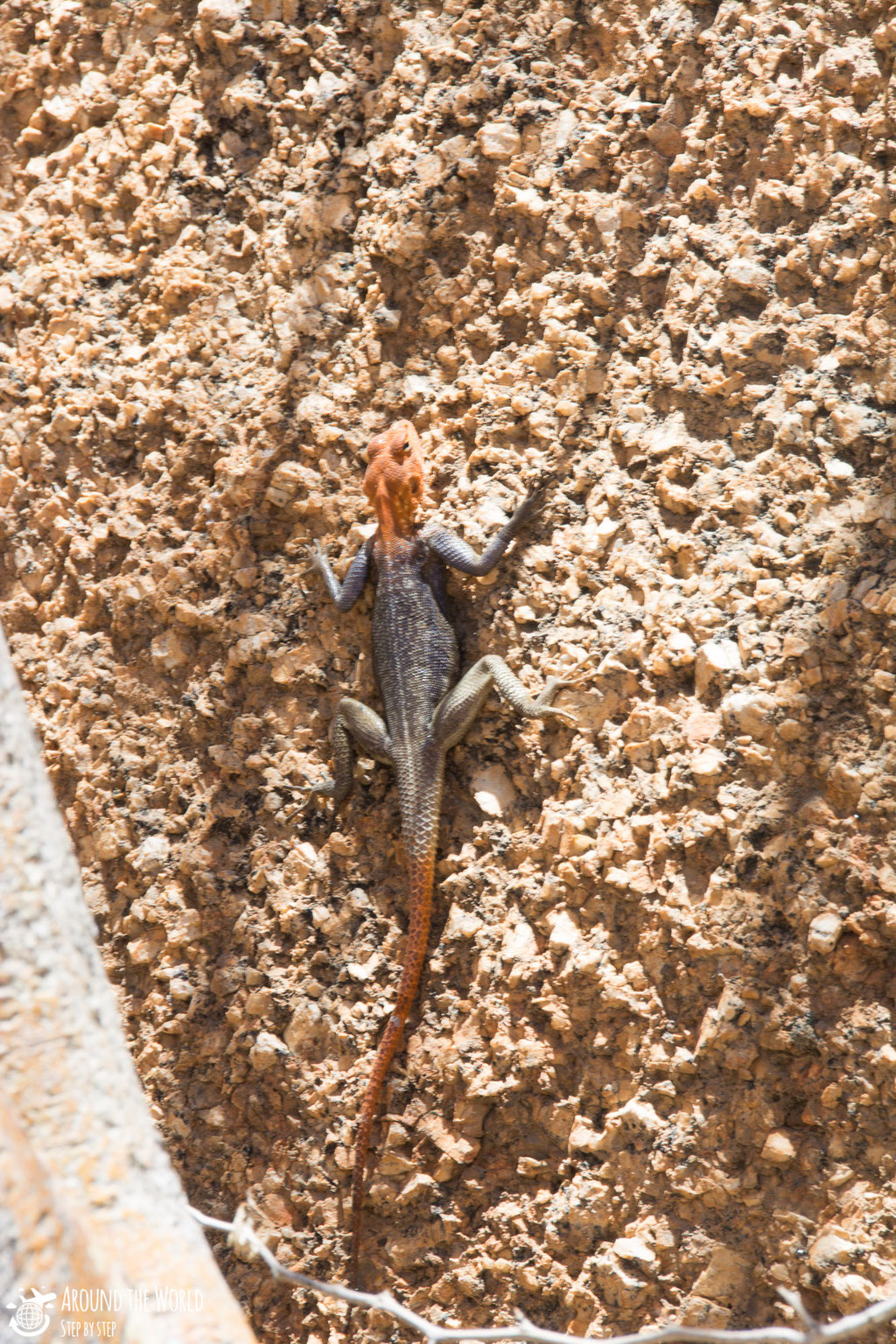 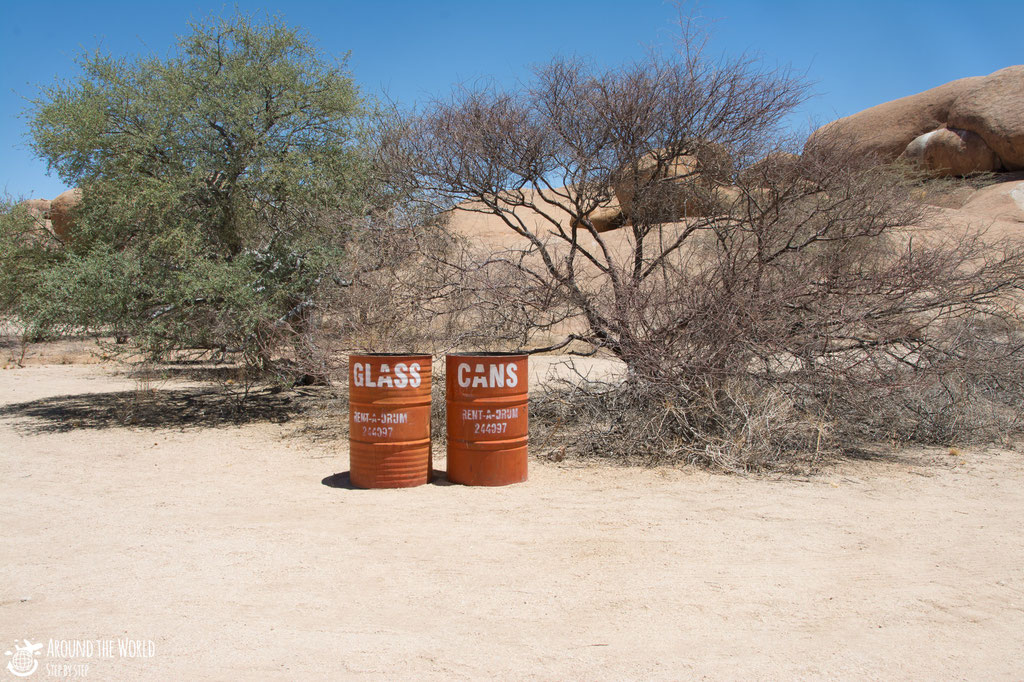 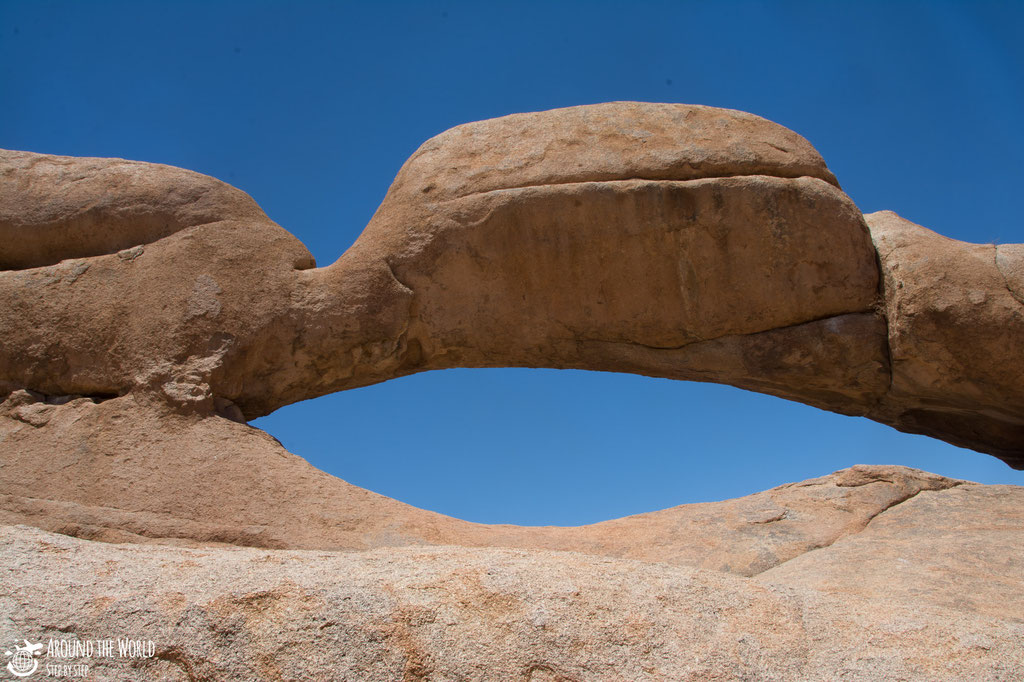 It is a deposit of large tree trunks that have "turned to stone" through a process of diagenesis. Its  trees were washed down all the way from Angola when ice melted thousands of years ago.

Is a Curious spot, although the tour take less than an hour the entrance Fees go to the community. There you can also find a really weird plant. 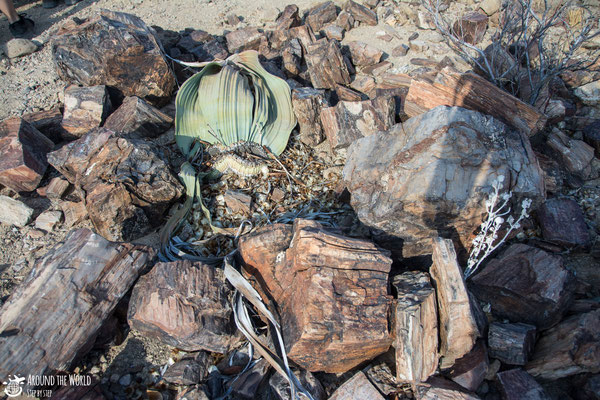 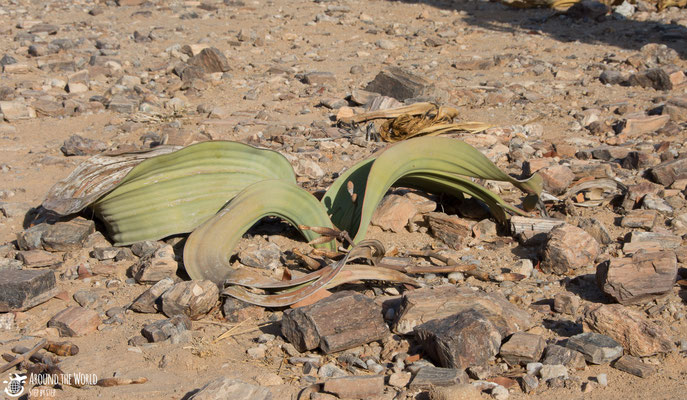 Welwitschia Mirabilis is one of the most amazing plants in the world that could only be find in Namibia.

This  plant can live up to 1,500 years It can survive on moisture from fog and dew.It consists of 2 leaves that grow continuously, a stem base and roots. It is thought to be a relic from the Jurassic Period and it has changed very little since then.

The Himba is the famous tribe of ’red people’ in northern Namibia.The tribe's cultural resilience stems from isolation, pride in its culture and government protection

The traditional Himba people are mostly settled in the Kaokoland in the remote Kunene region and have a population of up to 50,000. There are many villages close to the road from Oputo to the Epupa Falls

They wear short skirts made and from puberty Himba women braid their hair and veneer each one with clay and red ochre made from ferruginous soils, and they use the same mixture to paint their bodies red.

One of the most remarkable Himba traits is that the women are not allowed to use water for washing. This implies themselves and also their clothes. According to the elderly this dates back to the great droughts where water was scarce and only men were allowed access to water for washing purposes. Apart from applying red ochre on their skin, Himba women do take a daily smoke bath in order to maintain personal hygiene. 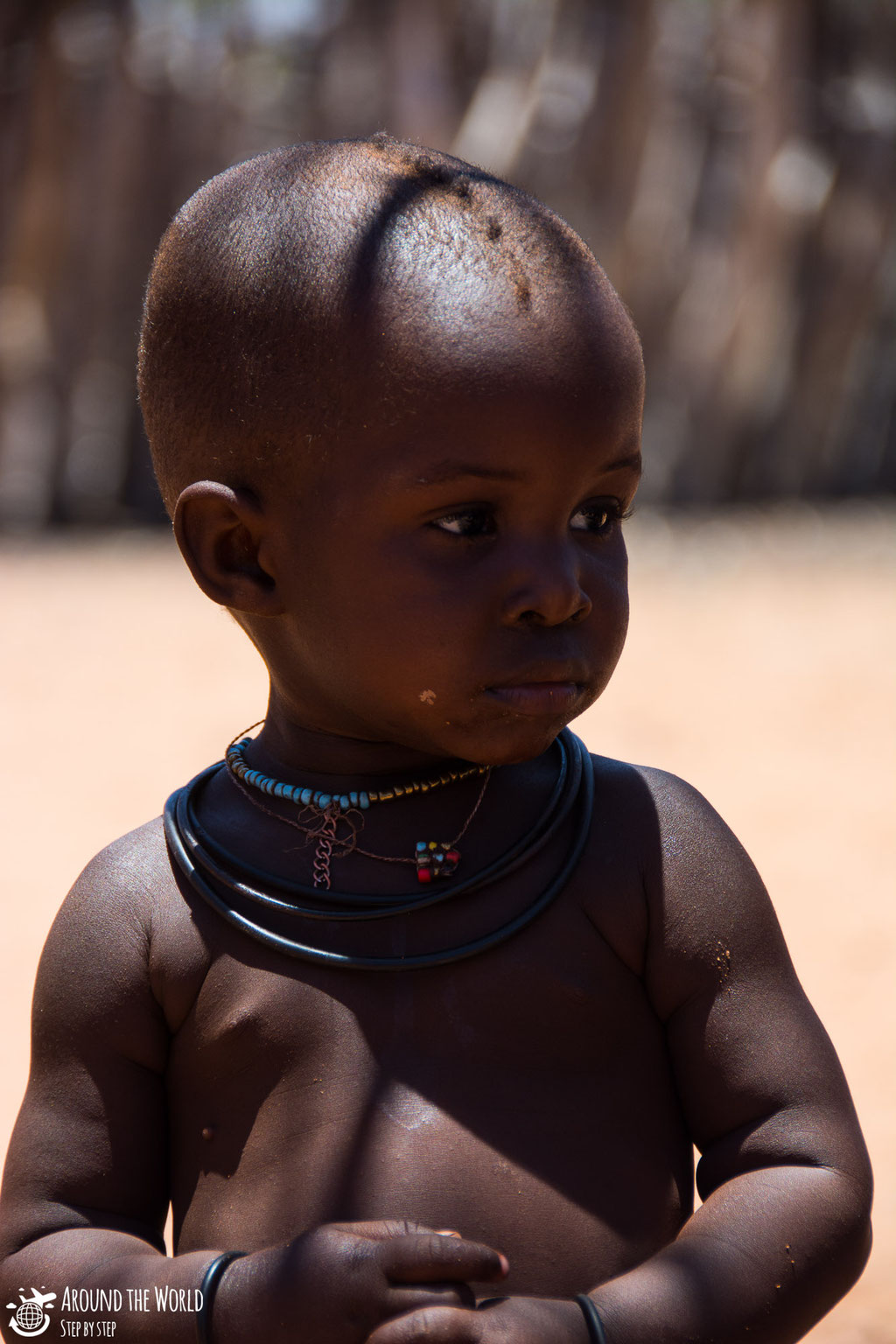 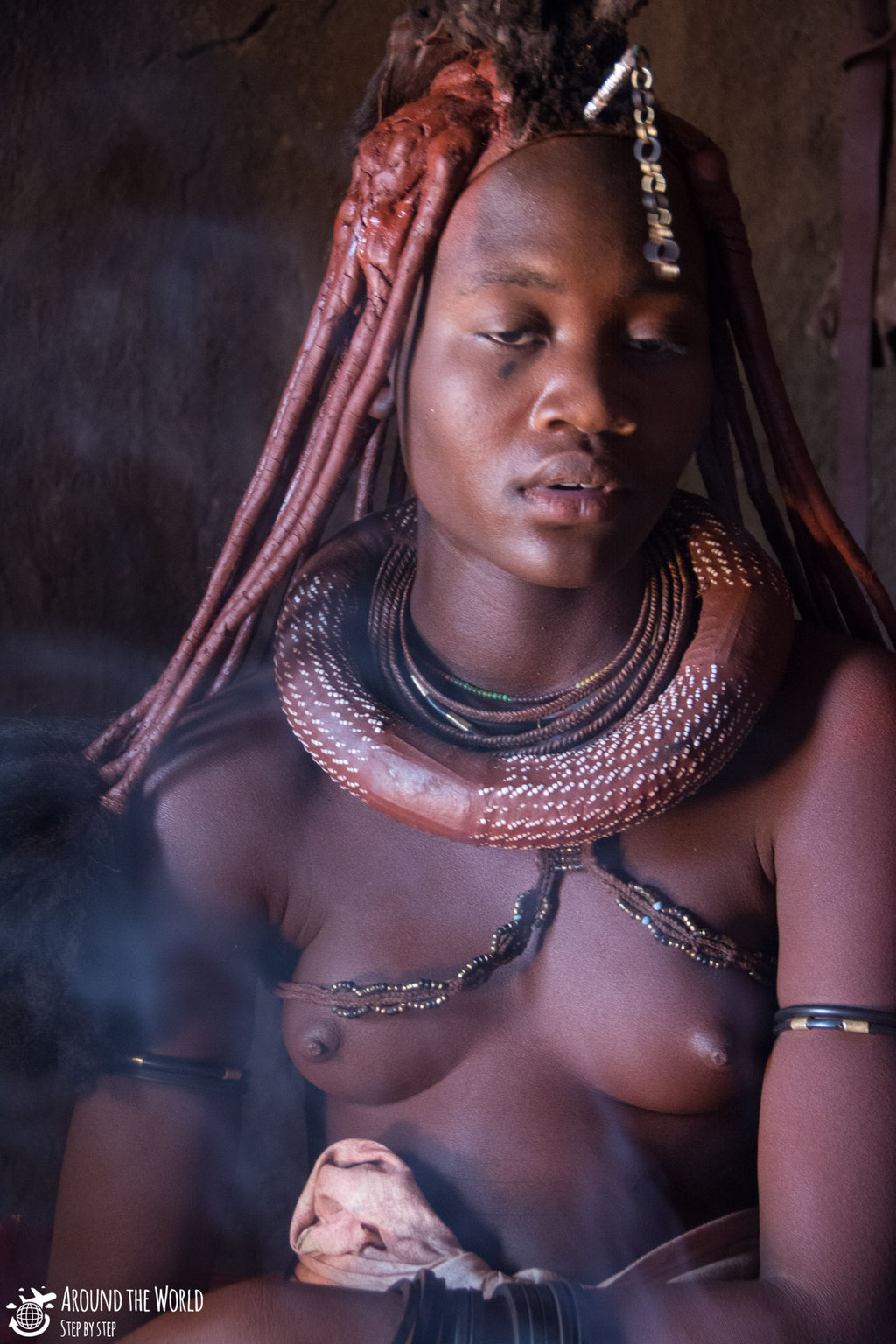 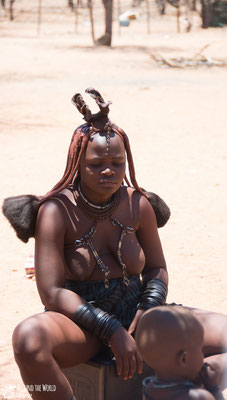 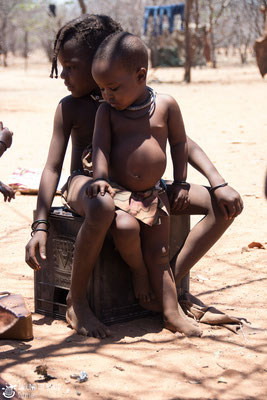 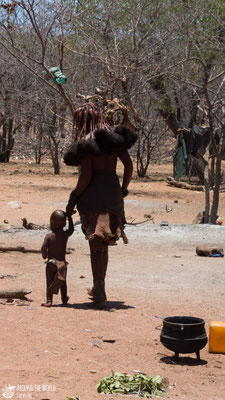 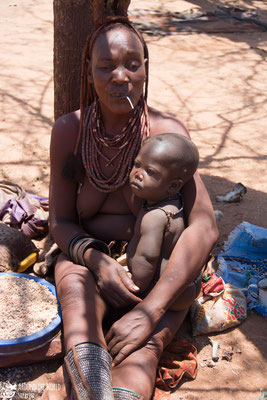 My experience with the Himba was a little disappointed, I didn’t visit a real village instead I went to Otjikandero Himba Orphan Village close to Kamanjab. Some childrens are move from Kaokoland during a certain period, some of then go to the primary school. In my visit I show a himba girld who even make her way till the university. With the children there are some Himba volunteer women who came from Kaokoland to live there to assist with the raising of the children. These women are usually family relations of the children and they ensure that the children get raised in the traditional fashion.

Our tour guide was a himba man but dressing like a western, he explains us the himba culture and we even get to see a woman taking a smoke bath.

At the end what you get to see is a group of children asking for sweets and women trying to sell you handy craft,  who look like they are tired to live surrender by tourist, there are several tours every day. I felt like if I were in a zoo. I guess Is probably better to go the north to visit one of the original villages.

The Herero are an ethnic group inhabiting parts of Southern Africa. The majority reside in Namibia, with the remainder found in Botswana and Angola.

The Hereros are traditionally cattle-herding pastoralists who rate status on the number of cattle owned.

The  Germans Almost annihilated the Herero and Nama in the early XXth century. In fact, the Germans took hundreds of Herero head to study their courage. They could not understand how they kept fighting with lances and stones when the Germans easily shoot them (some of the heads were return in 2011).

The Herero have been accommodated to modern life. They have electricity, running water, bathrooms, cars, tele, appliances and mobiles but they still live under their own traditions.

They have a very special cultural identity. The ladies of the Herero have devoted themselves to a style of dress which looks like something straight out of the Victorian period– just with added color. They make their own dresses an were them the  hole year.

The hat says how old they are, the thicker the older. 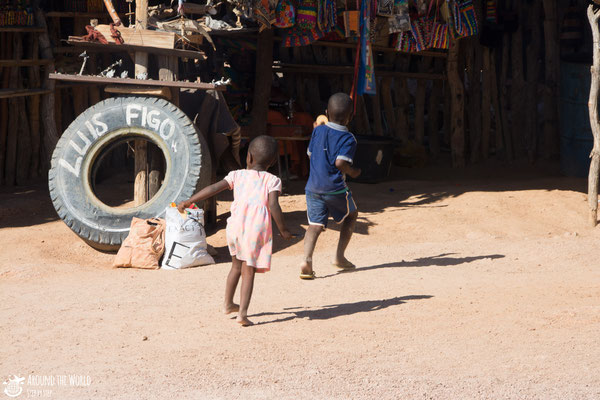 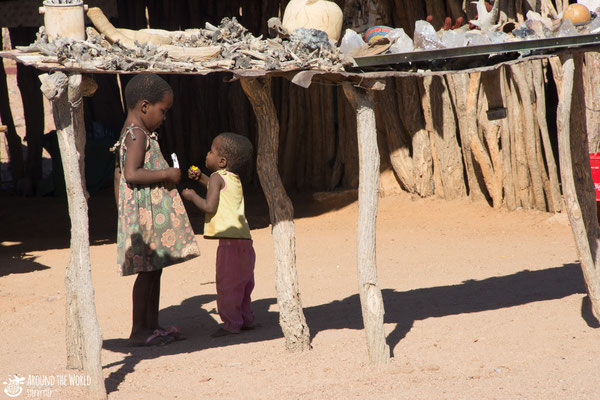 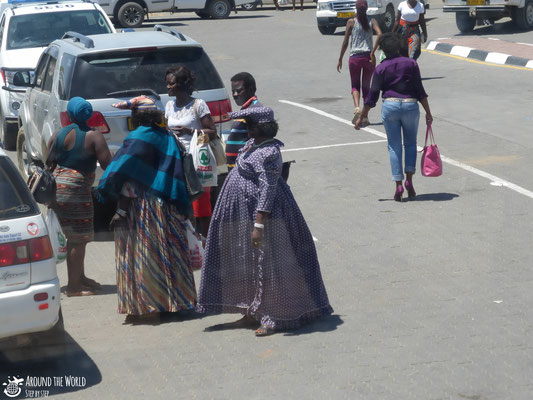 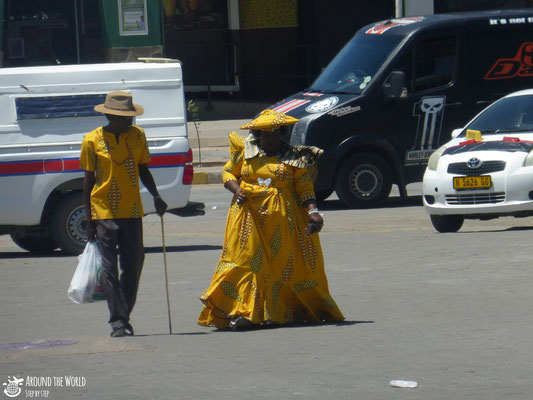