The second biggest island of Indonesia (and one of the biggest in the world) has an amazing nature and wildlife to discoverer.

I only have 10 days on the island so I had to choose wisely what I wanted to visit knowing that I was going to leave a lot appart. Because it was the second part on my trip and in the first one was diving in Raja ampat, I decided to skip any beach and concentrate in mittle north of the Island.

After spending a week under water in Raja Ampat I was ready for a change. And I really wanted to see orangutans.

The main reason to visit Sumatra was to see the orangutan, since they are are classified as Critically Endangered according to the International Union for the Conservation of Nature and Natural Resources. Extinction in the wild is likely in the next 10 years for Sumatran orangutans and soon after for Bornean orangutans.

In Sumatra the orangutans live in Gunung Leuser National Park. And there you can find two places to see them, the first one is Bukit Lawang, where there is a  Bohorok Orangutan Centre, The orangutans are on the whole more or less mostly re-rehabilitated ones and are fed and therefore there is a greater chance of seeing them. Bukit lawang is only 3h far from Medan and have tons of accomodations possibilities. The other places is Ketambe in the north of the park where they are in its natural habitat which means that you might not see them.

I took the 2 option, from Medan I took a minibus from Medan Padang Bulan , that leaves at the time that the driver want, from what I see, I arrive at 8:30 expecting to leave at 9, but the driver told me that we were leaving at 11, I told him that I was trying to reach Ketambe and finally we leave at 10.

I was the only person in occidental person and luckily for me there was a girl who spoke english and were talking most of the time. After 6 hours we arrived at Kutacane just in time to take the last Labi labi to ketambe, it took around 40 min.

Ketambe is a small village with some accommodation in the main road. I stay in Friendship Guesthouse  and arrange a trekking for the next day. I didn’t want to sleep in the jungle so my plan was to take a day treck and if I didn’t get to see an orangutan, do another day treck the next day. I was raining season I didn't feel like sleeping in the middle of nowhere.

the next day my tour guide advised me that becase it of the weather it was going to be difficult to see any orangutan. He gave me some antileech socks. 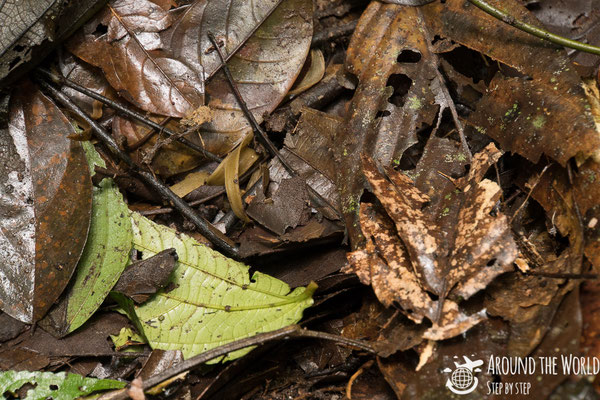 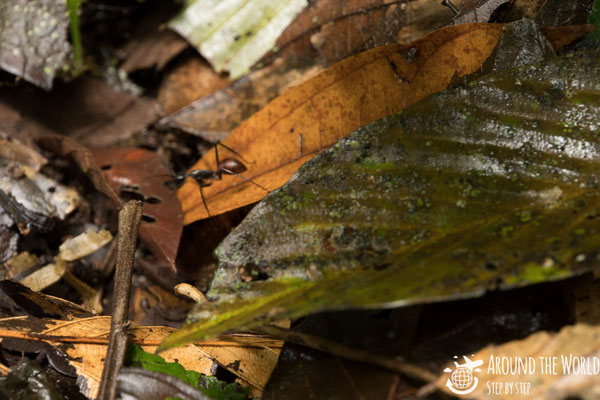 Because of the rain the path was really slippery, and I was quite tricky to walk in some places, i felt a couple of times.  After a while our guide sow an orangutan, what it was so hight on the tree that I couldn't sow it. We keep going through the deep forrest and finally got like an see some orangutans.

Actually we sow quite a few, even a baby with the mother. We were watching them for an hour or so, and I took as many pictures as I could, but bare with me, they where really above and with my 18-200 I did my best. I ended up with a neck pain of watching the whole time up. Well I guess that for good photos of orangutans is better to go to butik labang. In any case I’m happy that I got to see them completely free. 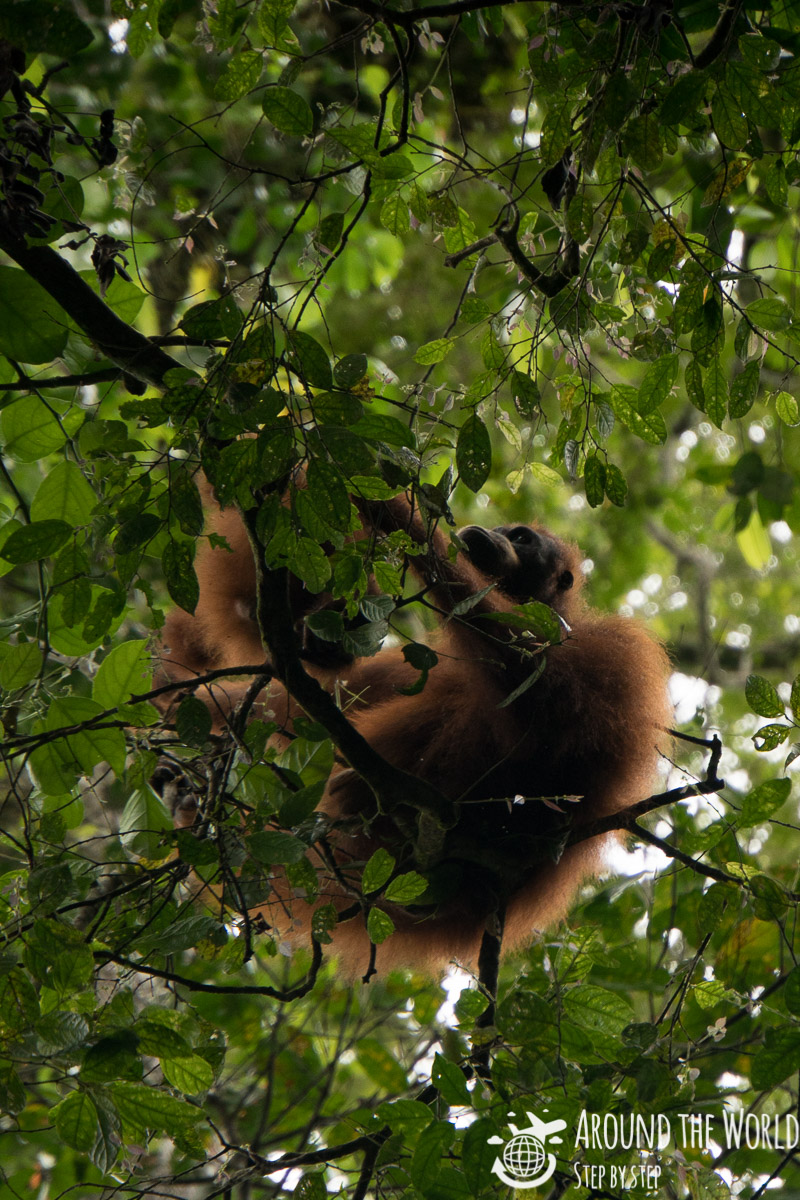 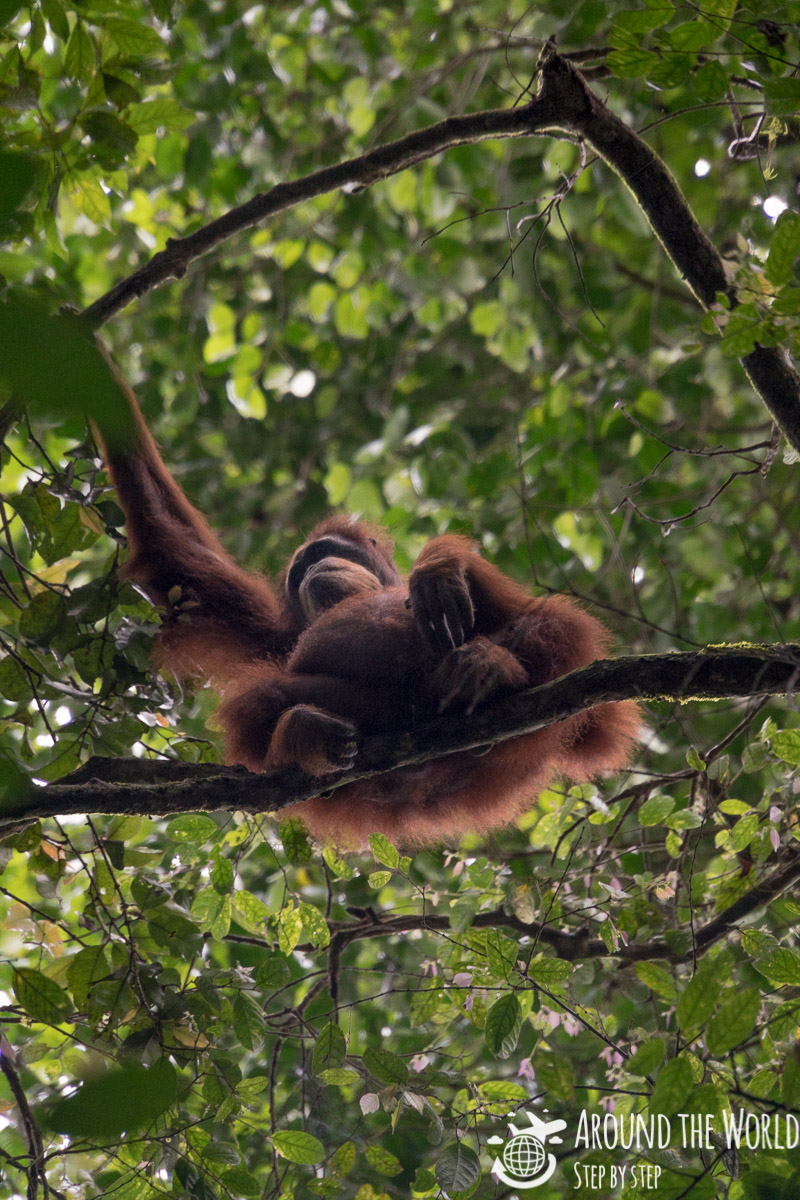 For lunch we arrive to the camping area, I was really glad on my decision of not spending the night there. The “tents” where just 4 sticks and a plastic, and there was a bunch of Thomas leaf monkey and Macaques going into the “tents” and taken things from inside, and it start to rain as I was there. 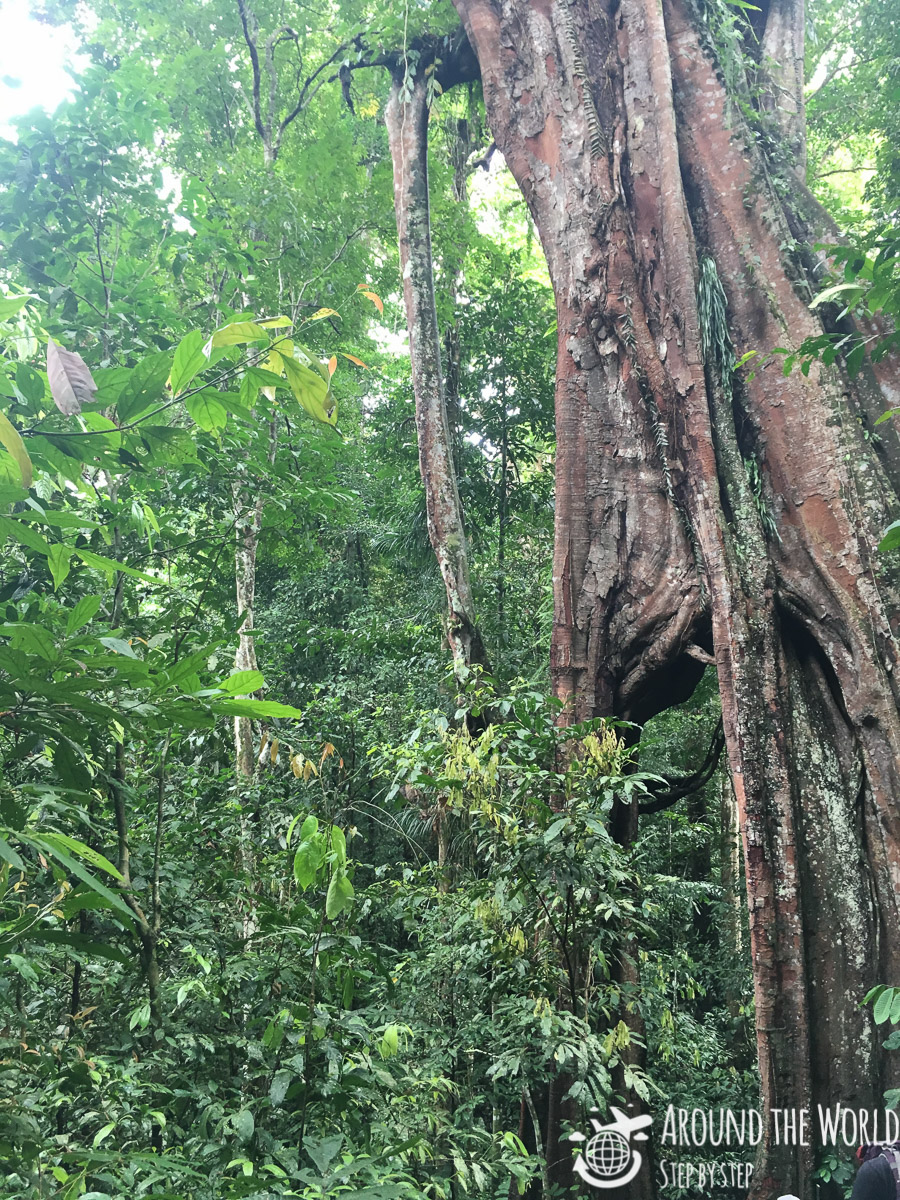 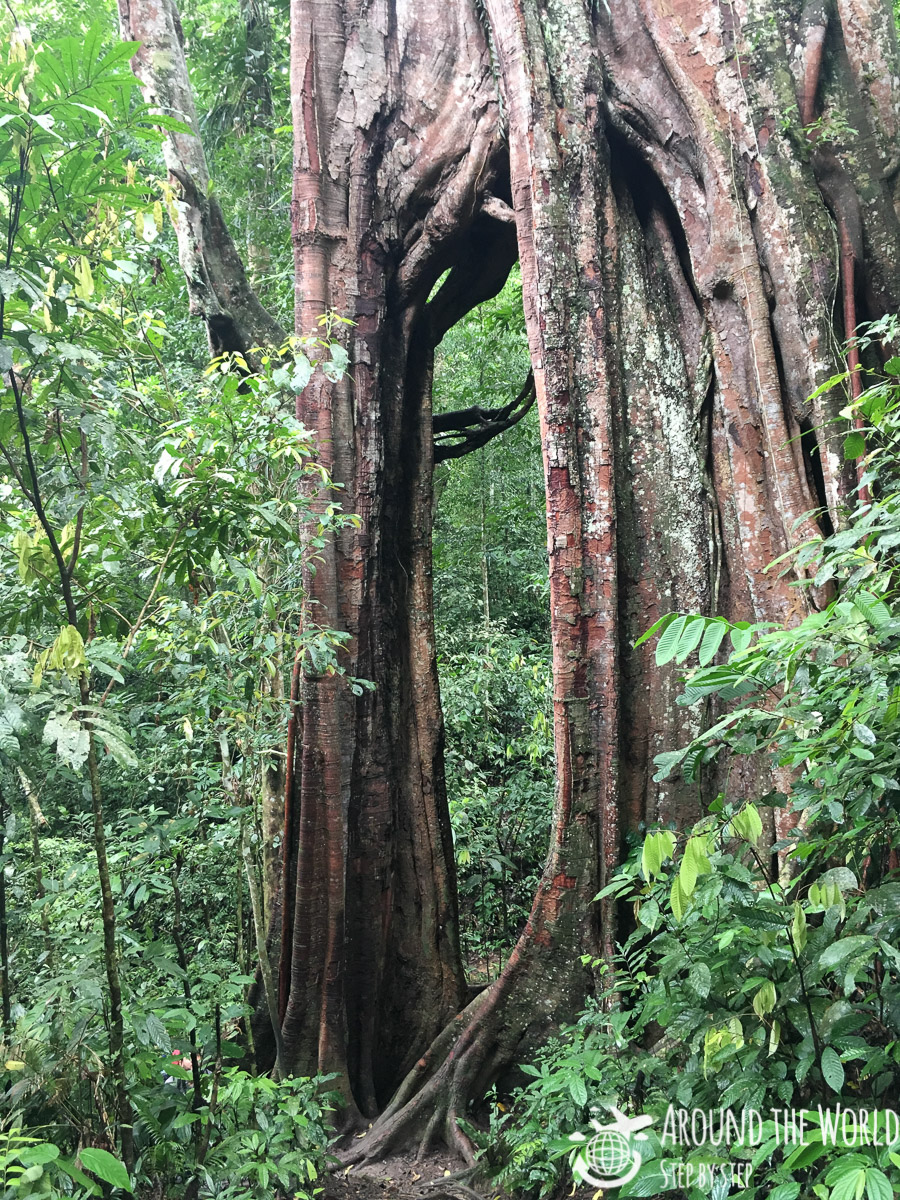 Since I already sow the orangutans, I leaved Ketambe on the next day, it was not in my plan but I decided to go to Berastagi to hike the Sibayac volcano.

The trip was more or less the same, labi labi to Kutacane(20.000 rp) and from ther minibus to ketambe(80.000 rp), once again the only occidental in the minibus, no one speaking ingles and half of the mini bus wanted to have a pic with me.

Once I arrive to Berastagi on my way to an accommodation I met a group of students that were with their teacher, and they wanted to practice english. The next day while visiting the local market several students wanted to talk to me as part of their homework.

I Because Berastagi wasn’t in my plan I didn’t look up for any accommodation, lucky the night before in Ketambe a fellow traveller recommend me one, and it was one of the best places I ever stay, the owner was super friendly and answer all of the questions and give suggestions and the rooms were completely new. I  arrange with him the taxi+ guide to the Sibayak volcano. you can walk from berastagi to the top of the volcano but because I wanted to see the sunrise I prefer to arrange a taxi.

At 4:30 we were on our way we went to buy car till almost the top, we just walk around 30 , the trek in not complicated, but because of the darkness a little of atension was needed. At the top there were a lot of people (manly local stu

dents that came to spend the weekend).After the treck we went to some hot springs, but i didn’t use them.T 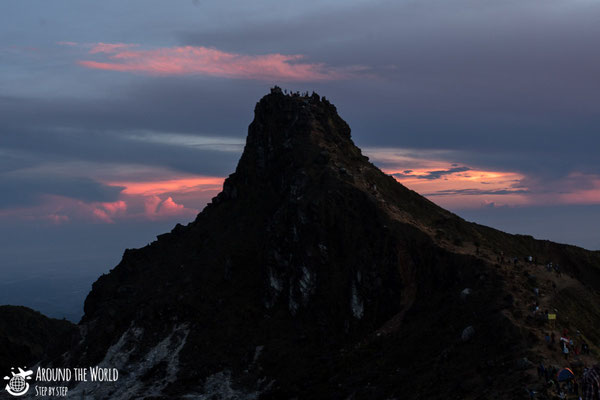 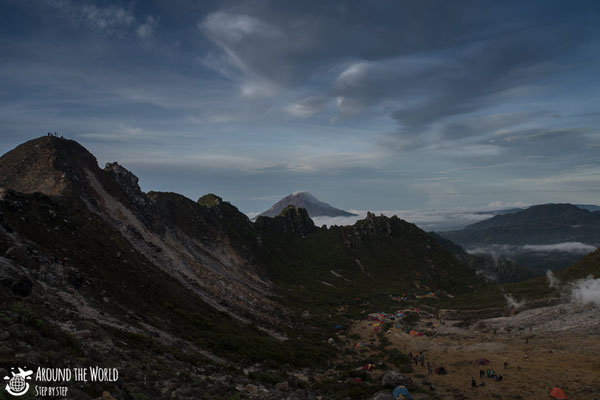 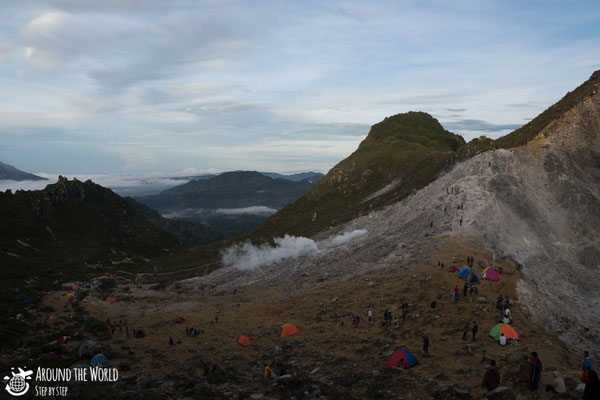 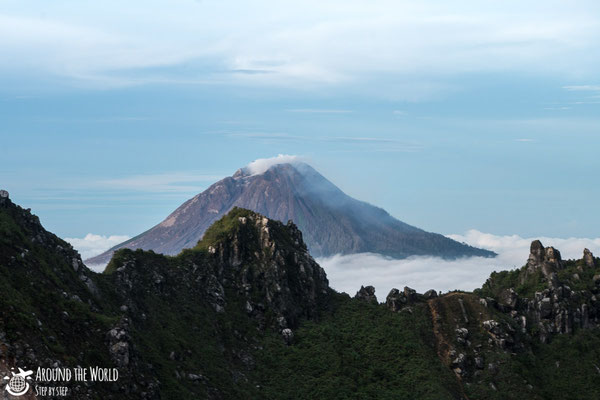 The rest of the day I visit Berastagi, the fruit market was really interesting, I bought some snake fruit (first pic) which was really tasty and again I was asked by kids who wanted to practice english. 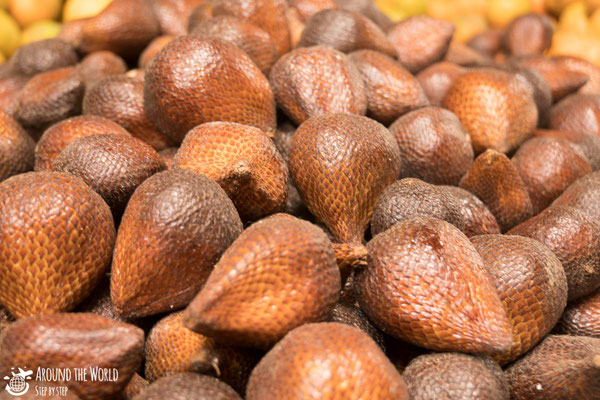 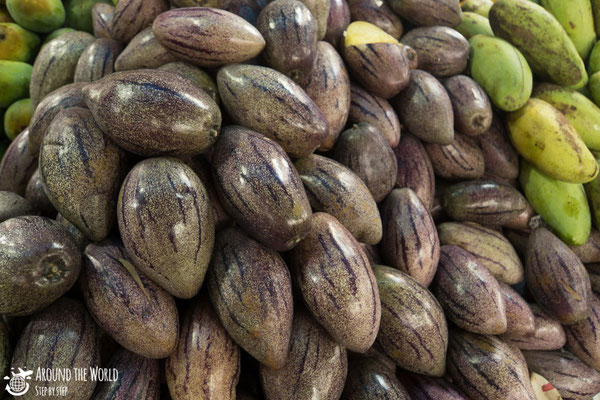 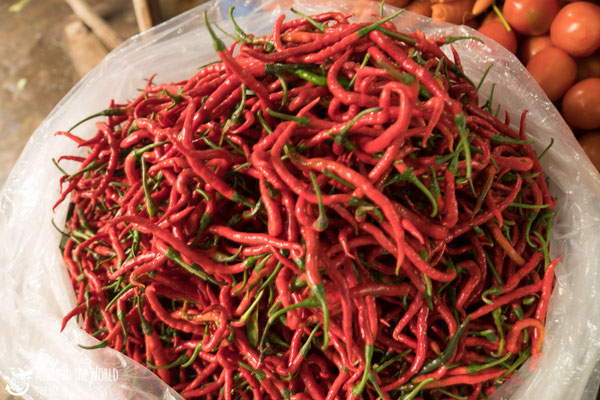 I also visit a chirstian church, that was completely different from outside but like any other from inside.

I read that there is a replica of the Shwedagon pagoda (the main pagoda in Yagon, burma, that I visit back in 2014) I tried to get there but I didn’t manage, I ended up visiting a chinnese cemetery that I found the way. 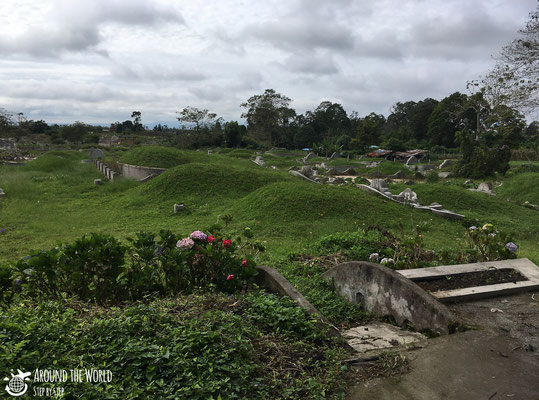 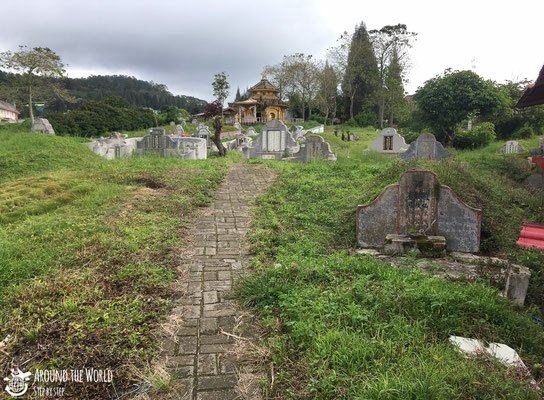 Maybe because every one told me that Berastegui is not that pretty and I went there without expecting much, I really enjoy, worth the visit for a day or day and a half.

I can’t not recomend enough this places, owners really friendly and really clean. I paid 360.000 for a double room with bathroom for 2 nights (nov 2018)

The trip to lake toba  was for me a nightmare, I was the last one to get in to the ban, which was full, I had to take my backpack with me, and the road had a lot of curves, and I start to get sick.

From Berastagui you have to go to Perabat and from there a ferry that let you by your accomodation in Parabat, the island in the middle of the lake, I stayed in Tuk tuk, the closest village to Perabat.

Lake toba is the biggest volkanik lake and is habited by the Batak ethnic.

Because of the of the size of the lake the Batak remained isolated until relatively recently. With the arrival of the Dutch settlers in the mid-nineteenth century, the Batak converted mostly to Christianity and gradually abandoned many of their ancestral customs, including cannibalism,. Even with that conversion to Christianity, the Batak culture is still very much alive today and the inhabitants of Samosir are still very proud of it, striving for tourists to know it.

The houses are built on pillars two meters from the ground and crowned by buffalo horns. They are made of wood and the roof is covered with palm fiber (currently with steel). The facades are extravagantly decorated with wooden works representing snakes, lizards, spirals and monster heads. The space under the floor is intended for domestic animals. The middle section is the living space, long and open, without walls, there live between 8 and 10 families.

The best way to go around the island is to rent a bike all around the island you can find the tipical batak houses. My first stop was the Museum Huta Balon Simanindo, the museum used to be the home of a king, and has a small collection of Batak artefacts. The main draw though, is the traditional dance at 10.30 am, I didn’t did not manage to catch the dance, mainly because I didn’t new about it. 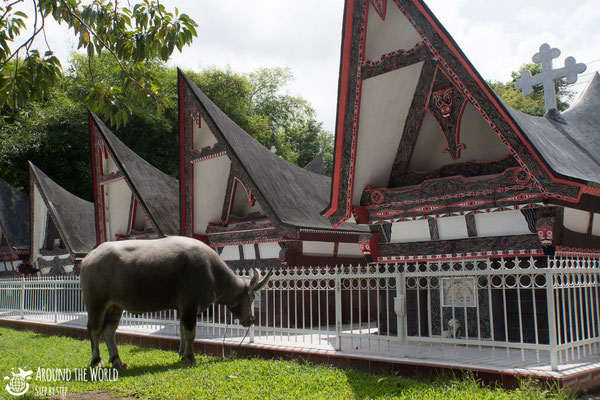 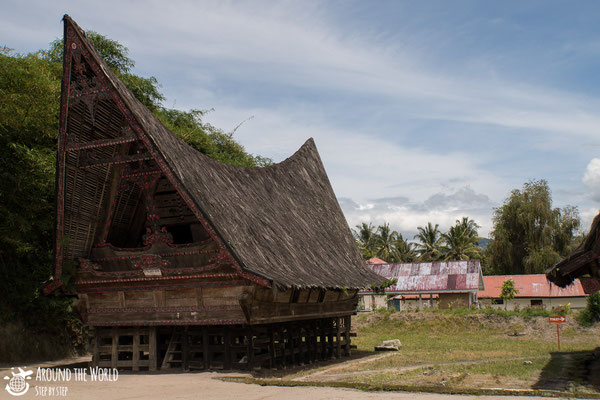 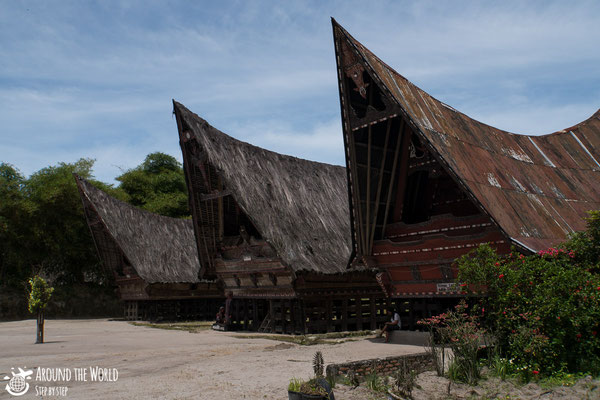 In Ambarita the main attraction here is the 200 year old stone chairs within the compound of the village.

There are 2 sets of stone chairs in the village. The first set was used for official meetings between royalty and important members of the nearby communities. and the second ones apparently were used for  morbid purposes.

After this  visit it staredt to rain heavily, I stop in the middle of the road, to eat something (fish of course) and wait till the rain stops (bike and rain is not a good combination). In Sumatra they normally eat with the right hand, taking some rice and mixing it with your meal, you also get a bowl with water to clean your hand. 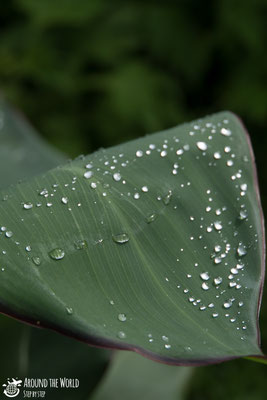 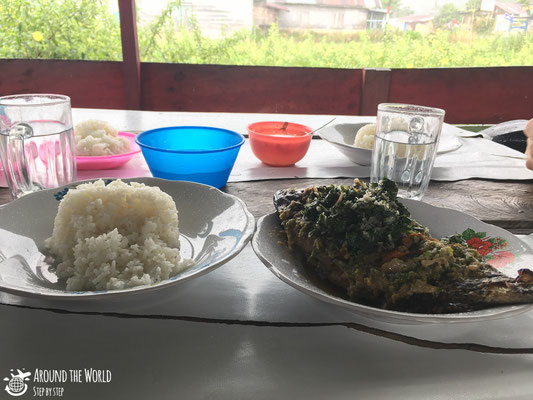 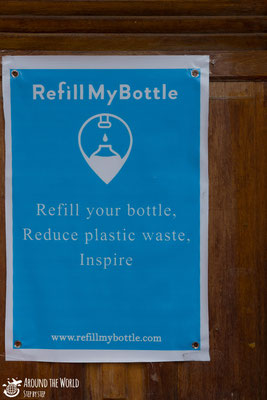 In Samosir There are many other attractions to see, but because of the weather I didn’t want to rent a bike again. Nevertheless I enjoy the landscapes it is a really nice place to relax 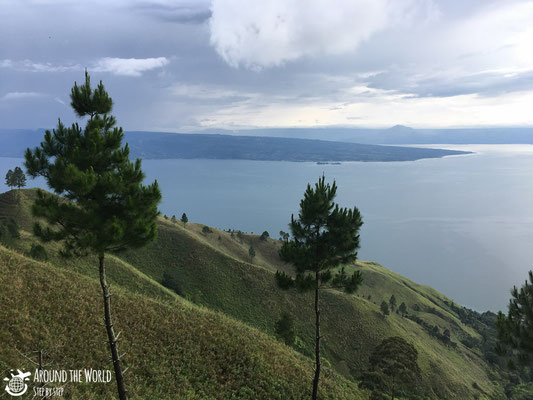 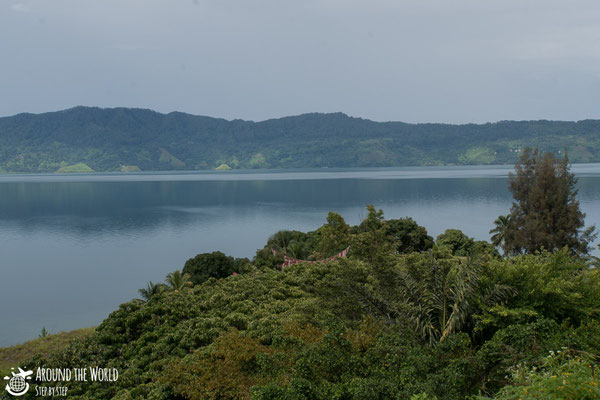